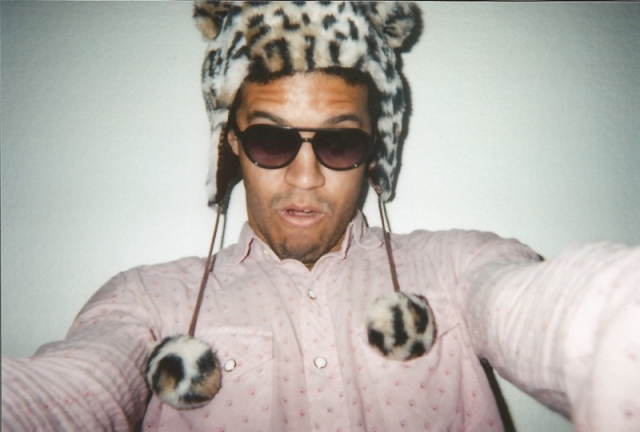 Where’s home?
Hollywood! Los Angeles, California! The United States of America! The USA is nucleus of my operation, but I’d like to branch out to Stockholm, Sweden, Amsterdam, Netherlands, and Tokyo, Japan.

What do you do for a crust?
Being an artist is my full time job. Everyday I’m on the run…the grind if you will. My life is non-stop, but I wouldn’t want it any other way. No breaks. And I’m not going to stop until I get what I want, which is infinite everything! Maximum blondes! Maximum candy! Maximum money! Maximum sex! Maximum power! Maximum fame! Maximum love! Maximum life!

Can you tell us about your creative background?
I started shooting disposable cameras in high school as a joke. It was a slaphappy gimmick I could carry around in my pocket get a quick rise out of people…and to keep myself sane during insane times. Little did I know that I was capturing memories in each moment, but also that bizarre unknown unexplainable unmistakable lovely feel good thing called art that keeps you coming back for more! MORE I SAY!

What inspires you to shoot film?
Shooting film for me is about being engaged completely in the moment. The snap and shoot element of using a disposable camera turns me on. The mystery of not knowing what you shot until your film develops is seductive. The anticipation of experiencing something for the first time! All those lovey dovey things! A bird flying in a crystal clear cerulean sky! Eating colorful candy late at night with the ditzy tall blonde girl of your dreams! Speeding in an American muscle car at night on an open road headed out of town with only a leather jacket on your back with sunglasses on! The shameless rebel spirit! Just being cool walking down the street in a suit on turning heads. Stuff like that. With every new roll of film I develop and finally see, I feel like I’m opening up a perfect-shiny new birthday gift from the heavens. And being something of a surfer now, the two are very similar for me. You just want to be out there in the water, have fun, and try to make something happen. Maybe the surf will be good, maybe the surf will be bad…either way you have to ride the wave. The same can be applied to film photography, maybe it’ll be a bad day, maybe a good day, either way it’ll be a day to shoot! SHOOT! SHOOT! SHOOT!

How did you come to connect with Indisposable Concept?
My good friend, and fellow artist Nicholas Widener suggested it to me a few years ago. God bless him!

Do you remember what was in the first roll of film you shot for IC?
I can’t remember since I suffer from memory loss. Sometimes I can’t remember to put my pants on before I go out. My mind works at a rigorous rate, so there’s lot of simple stuff that is out of my control in my typical day. It was probably a kaleidoscopic combination of blondes, trucks, candy, blue-collar heroes, and myself! ME ME ME ME ME ME ME ME!

What is your fav photo that you’ve shot for IC? Tell us a bit about it.
There’s a shot I took on Roll 3 with a disposable camera at the end of the Running of the Bulls in Pamplona, Spain where everyone is running into the arena that the run ends at. It has it all: energy, mystery, fear, life. I only had my little Kodak disposable camera on me during the run, so I tried to grab what I could in the chaos! WHAT A RUSH IT WAS! I live for those moments.

If someone destroyed all the disposable cameras in the world and you had the very last one, what would you capture?
Blondes!

Explain your style/approach when shooting a roll.
Trust your instincts.

How would you describe your photographic style?
It’s maximalist and minimalist! Abstract with a touch of pop punch! It’s fun on a surface level, but there’s more to explore if you want to.

Who or what influences you creatively?
Kevin Costner.

Where do you find inspiration?
I’m a big runner! So when I go on long runs, there comes a moment when you can either quit, give in, or keep going, keep running. A moment to either live, or a moment to simply die. In that moment, I have the maximum spiritual experience. In that moment I’m alive, and I simply come to the conclusion I’ll never quit! That I’ll fight to the death until the job is done! It’s very American in a lot of ways…blue collar. It’s all about having a beat up baseball cap, putting your head down, and doing the dirt work. Sometimes you have to go through great pain to realize how great you truly are.

5 photos from history you wish you’d taken?
1. Raising the Flag on Iwo Jima by Joe Rosenthal
2. The Last Sitting (photo shoot of Marilyn Monroe) by Bert Stern
3. Leap into the Void by Yves Klein
4. Every Playboy cover of Pamela Anderson
5. Neil Armstrong in tears after the first moon walk by Buzz Aldrin
6. Norgay on top of Mount Everest photo taken by Sir Edmund Hillary

5 books you wish you had written?
1. Crazy From The Heat by David Lee Roth
2. Miss Lonelyhearts by Nathanael West
3. Dreams From Bunker Hill by John Fante
4. Invisible Man by Ralph Ellison
5. Walk on the Wild Side by Dennis Rodman