Who are you?
A recent college graduate, currently living in Los Angeles, CA

What do you do for a crust?
I work for CA State Parks as an Environmental Services Intern – basically doing habitat restoration work around the Malibu/Ventura areas.

Can you tell us about your creative background?
I started getting into photography when I was younger. I was super shy as a kid, so I used photography and film as an outlet for me to get my thoughts out there. It definitely helped me become more outgoing; I used to just shoot with my sisters, but as I got more into taking photos, people wanted to collaborate and shoot for fun. It was a great way to help me get out of my comfort zone and force me to talk to people.

What inspires you to shoot film?
I love that every photo shot with film is unique. Whether it’s a light leak or grain or a speck of dust on the lens, each photo turns out completely different from the rest. Plus, I’m more aware of what I’m shooting when I’m using film, because I don’t like wasting rolls. Using film inspires me to get outside and capture different moments to show people how great this planet is. I think it’s super important to do something that is meaningful and exciting as frequently as possible, and I think taking photos is a beautiful way to save a memory and inspire others to explore. Every time I go to get a roll developed, I’m always super pumped – it’s like getting some mystery-box-present-type-thing. I never know what is going to show up, and that’s what keeps it exciting.

How did you come to connect with Indisposable Concept?
My sister told me about the idea, and I loved the idea of connecting with people who were into using film, and seeing what they shot.

Do you remember what was in the first roll of film you shot for IC?
I believe it was from a trip I took with my siblings down the coast of California.

What is your fav photo that you’ve shot for IC? Tell us a bit about it.
During the summer, my friend and I took a drive up the coast to Malibu to try to catch the full moon. We found ourselves at Leo Carrillo, with a super fun crowd of people, and surfed until dark! See the roll HERE.

It seems film photography and disposables are making a comeback, why do you think that is?
I think that fact that pretty much everyone nowadays has access to a camera on their phone makes taking photos super easy. I love to use film because it makes the whole process of photography a bit more challenging and interesting.For me, it becomes more personal; you have to make to effort to go to the store, interact with the people there, buy film, get it processed, etc. I think the end product is a bit more rewarding than just taking a bunch of photos in a row and hoping one turns out. Using film makes you really think about what you want to shoot, and the end result turns out a bit more special.

If someone destroyed all the disposable cameras in the world and you had the very last one, what would you capture?
I would definitely use it to take photos of the lake I grew up on. There are so many spots to jump off rocks and rope swing on. Such a fun time! Actually, a lot of my rolls of film have been from spending time there during the summer, never gets old.

What does 2016 hold for you?
I’ve been planning a lot of trips! I’m taking time out and explore, and go places with people that make me happy.

Explain your style/approach when shooting a roll.
I usually only take photos when I’m out and about with my friends, and I know the photos will be worth taking. I tend to take pictures when people aren’t paying attention, so the photo seems less contrived, and more about the person in their element, when they are totally comfortable.

How would you describe your photographic style?
I tend to avoid using people’s faces in my photos. I think that was partially due to the influence of “the selfie”; that’s mostly what I saw on my social media feeds, and I guess I wanted to go for something that was totally the opposite. I feel like photos nowadays are predominantly based on people’s looks, and how their face appears in a photo, even if it’s unintentional. I try to avoid focusing entirely on a person’s face and focus on their body in motion, or how they are feeling in a moment. Leaving out a person’s face leaves a bit more to the imagination, and forces people to take in the whole scene of the picture.

Who or what influences you creatively?
I love to look at other artist’s work and creative approach. Classic surrealist artists along with modern conceptual photographers are my favorite. When I see their work, I always get a creative spark.

Where do you find inspiration?
I am always super happy to shoot when I am in a place that I find unique; something you don’t always see everyday. I love being outside in nature, and that is a big influence on my photography, but I also love shooting in urban areas as well. 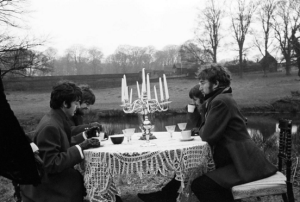 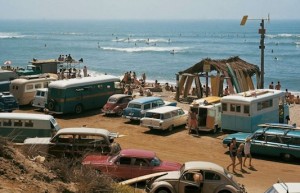 5. Audrey Hepburn and her pets