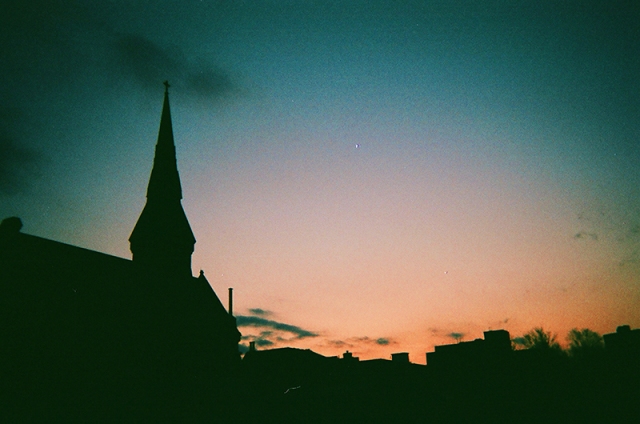 What do you do for a crust?
I’m a full time freelance videographer, as of right now I specialize in dealerships and real estate.

Can you tell us about your creative background?
Went to film school in Thunder Bay, Ontario, Canada where I learned a ton about cameras, lighting, etc. I try to produce 1 short film a year. I’ve shot over 40 short films in the last couple years ranging from 16mm film to RED cameras. The last big short I produced was a finalist in a Canadian film competition.

Best advice you’ve ever been given?
Shoot anything and everything cause you never know where you’ll next gig will come from.

What do you do with your free time?
I love going to record stores and shifting through the bins or hanging out on a patio with some beer. Being a father has also been very rewarding. I also enjoy traveling to places I’ve never been whether its a town a few kilometres away or a country a couple continents away.

Tips for making your ideas and dreams come to life…
Work hard, play hard, and shoot everything because what starts off as a free shoot can become a reoccurring paid gig.

What inspires you to shoot film?
Being a photographer for many years now using DSLR’s exclusively it was cool to have fun and experiment with film again. I found I was editing my digital photos to look as close to film as possible than thought “lets try film again” and the cheapest way to shoot 35mm is disposable cameras.

When shooting with disposables/film, how does it make you feel not being able to see the photos as they are taken?
I think thats one of the best parts of shooting film is its perfect imperfections. I was always curious to see how the shots developed by not knowing was half the fun and it makes it that much better when an image turns out great. I prefer analogue as a hobby, because I am a full time videographer digital cameras will always be my go to for client based work. Right now I shoot on the Sony A7sii and Canon 6D.

It seems film photography and disposables are making a comeback, why do you think that is?
I think people like myself realized that by using apps like VSCO or the filters on Instagram that you’re trying to replicate the film look on digital photos so I thought I’d take it a step further and actually shoot on film to get that more authentic look.

Who or what influences you creatively?
Right now 1 individual thats really been inspirational to me as of late is Casey Neistat. His approach to filmmaking and making a compelling piece without any budget is really inspirational.

Where do you find inspiration? Favourite place to shoot?
A place I’ve never been because it gets my creative juices flowing.

5 things we need to watch on Netflix?
1. Master of None
2. Bojack Horseman
3. Tales by Light
4. Bloodline
5. Secret Life of Walter Mitty

5 favourite places to eat/drink?
Guelph has numerous amazing restaurants ranging from pub style to other cultural cuisines (like aboriginal or Indian, etc).
If I had to recommend anything it would be Flying Chestnut Indian Tacos. They usually pop up at most Toronto area music festivals but they also have a restaurant in the city as well.